This web page is to help you locate appropriate scholarly sources for your assignments with literary commentary.

To make best use of your time, strategize your search--both in the resources you select and search terms you use. Doing subject-specific research in a general database, rather than a subject-focused database is going to leave you out of the most important scholarly conversations and use up precious time!

Your draft research essay requires a minimum of 10 sources, and more gives you flexibility as you develop your arguments, so keep that in mind as you explore the resources offered in the tabs on this page.

Email or chat your subject librarian using the contact information on the right of this page. We can provide remote research assistance via Zoom (which allows for screensharing), chat, email, and phone.

To search for books, you need to use our Library Catalog. Depending on how much time you have, you have options.

Any well researched project uses books to support your thinking and writing. There are two kinds of books you can investigate in the library for literature research--texts and criticism. To find them in our library catalog, either do:

Additional material you should investigate is scholarly discussion of the moral, religious, political and historical elements of the author's time. As no one lives in a vacuum, what was occuring at the time will have bearing on what the author writes about and how it is said. Sample searches which are not literary-oriented but useful can include:

These are works like encyclopedias, directories, and collections of reviews. They may be quick overviews or in-depth studies and are frequently useful for short facts or overviews, birthdates, statistics and bibliographies of sources. There are a number of useful resources mentioned in Baker and Huling's Research Guide for Undergraduate Students which is held at CSUSM.

Gale Publishing has a number of useful compilations of literature criticism in a variety of series. Recently, CSUSM stopped the print series subscriptions in order to puchase the database, LITERATURE CRITICISM ONLINE, for one-stop shopping. One problem with the database is that not all content of the earlier volumes of these sets digitized, therefore you may find yourself needing to check the print volumes at times.

Option 2: Books from Other sources

The same searches will reveal more materials (or additional copies) that you can get from either local or distant libraries.

CSU+ (3-5 day delivery)
Search the collections of the other 22 CSU libraries. Find and request books directly online; pick them up at our Library in 3-5 days.

WorldCat (5-10 day delivery)
Search the collections of libraries world-wide -- about 52,000,000 books. Find a book in this database, and fill-out an Interlibrary Loan delivery request. Book will be delivered to Library for pickup.

Google Books
Many of the results will not provide full text, but you discover what is available in the world beyond CSUSM, and we can probably borrow it for you.

Articles appropriate to your research will be located in a variety of databases. You need to find scholarly discussion as opposed to book reviews or opinion pieces, so be sure to review the quality of the article before assuming it will work.

In this section, there is a list of databases that are most useful to literature researchers. The MLA Specifics tab provides help in effectively reading and using the MLA database results.

The MLA database is a well-regarded online resource to literature studies and definitely where you want to begin your search!

The following list is a suggested core collection to review in looking for literary criticism, your research may take you to additional sources.

How to Search the Bibliography (from the Modern Language Association website)

Using the MLA International Bibliography begins with a search. The bibliography offers many search options, which can be selected and combined to tailor the results to the researcher’s specific needs. These options include

A searchable list of all the subject terms in the bibliography and their related terms can be found in the MLA Thesaurus, included with every subscription. 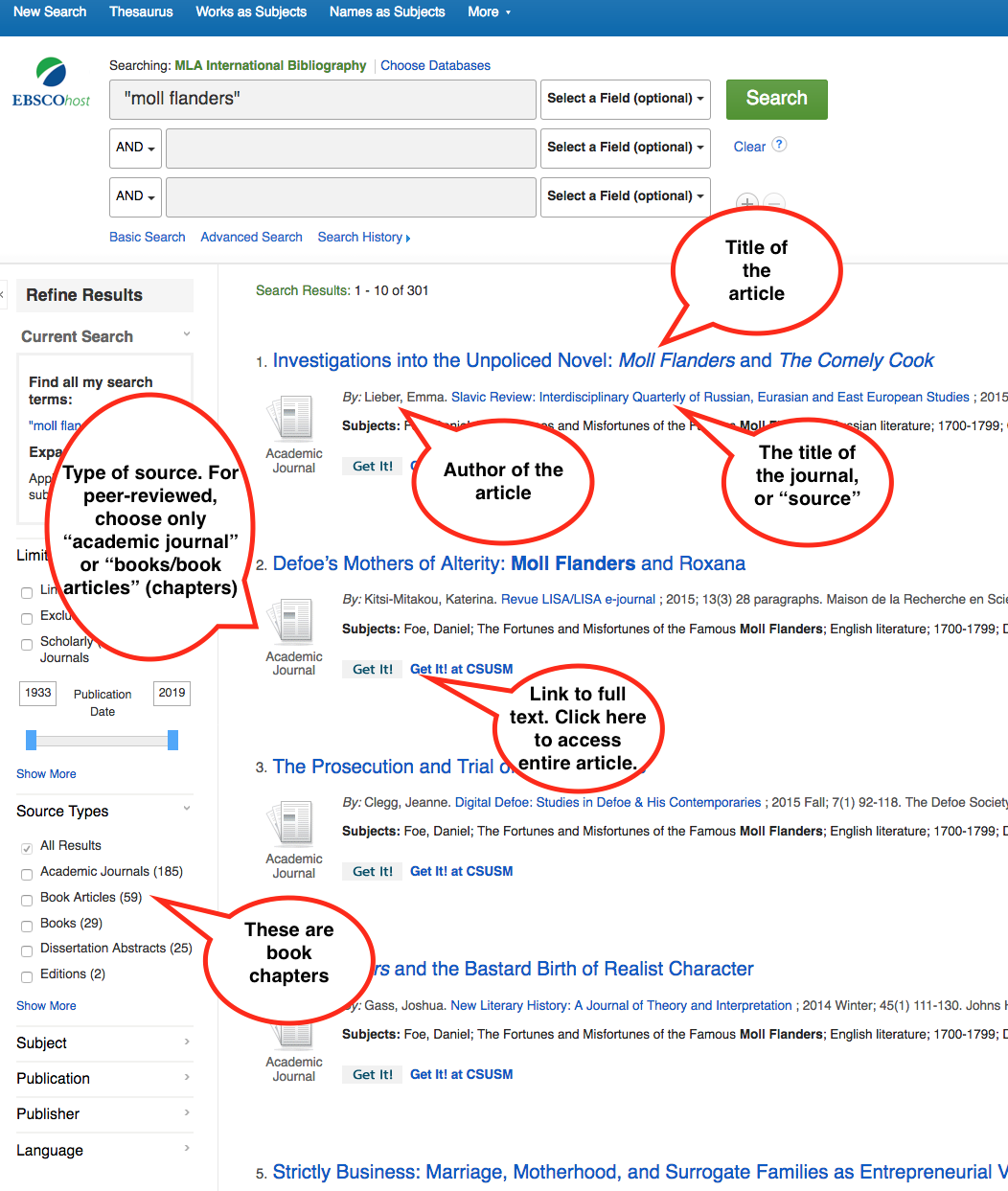 General Information:
--Title of the entry (whether article, book, book chapter, etc.) is the hyperlinked line. Click here to see more information on the entry.
--Author is the person(s) who wrote the article, not the subject of your study.
--Source notes the title of the journal or book that this entry is from.
--Volume, year of publication, and pages within the source are given and needed for any citation or loan request. Books, book chapters and dissertations will also have publisher listed with place of publication.
--Book Article denotes a chapter in a larger work. You would search the CSUSM catalog for the BOOK title, not chapter title.

GET IT Button
This icon will link you to the full text if available in other databases provided by CSUSM. The link is not successful on searching book chapters, so double check the catalog by the book title.

As you write your paper, you'll need to cite passages and ideas from the sources you've found.  In order to cite your resources properly, you need to follow the style guide used by for this class, the MLA Handbook.

What is a Reprint?

The word 'reprint' can be used in several ways, but for citation purposes in literature research, it is a work which has gathered previously-published materials from other sources and published (or digitized) these works in a new work (AKA anthology, collection or database) from a company that is not the original publisher.

None of the examples given here can be considered an original or primary source as the reprinted item may be edited for brevity or to correct a prior printing error. Any changes should be noted in the new work by the editors, but you, as the researcher should also check whether you are using the entire document if possible.

Examples of this type of publication that are found at CSUSM:

Stand-alone anthologies can also contain reprints, generally in collections of short stories or essays. This does NOT refer to volumes that have been re-issued in their entirety, but works gathered from a variety of sources where they were originally published. An example would be The World of the Short Story: A Twentieth Century Collection, which gathers stories previously published in magazines or other sources. Each story or entry will be noted with permission to reprint in the collection you are examining.

Database collections such as JSTOR, Project Muse and Academic Search Premier, provide access to information originally distributed by many other publishers in print form. They may choose to not digitze supplementary material from the original publication and may not be equipped to include charts, graphs and illustrations that supplement or clarify the text. The original publication information will be provided and must be included in your citation with the reprint source information.

How to Cite Reprints (MLA style)

As you write your paper, you'll need to cite passages and ideas from the sources you've found.  In order to cite your resources properly, you need to follow the style guide used in Literature & Writing Studies, the MLA Handbook (7th edition). MLA refers to these sources as 'reprinted works'.

New with the 7th edition:

Books and Articles from MLA Handbook Section 5.5.6, "A Work in an Anthology".
The rule here is to cite the original then provide the reprint's information.

Monographic Example: (note the story "The Narrative" was originally published under its own title, so The Complete Works... is the reprint work. Because the "Narrative" is within a larger work, it is placed within double quotes.

Serial Example (This example applies to the Gale literature criticism sets. Note the 'Rpt. in' phrase that leads to the collection that reprinted the item. If the reprint is an excerpt of the original published item, replace 'Rpt. in' with 'Excerpt from'.)

Online Version:  The rule is to cite the item, then provide information on the website/database, version, sponsor/publisher and date of publication, medium and date accessed.

Citing IN TEXT
MLA citations in text have two options: 'signal phrase' and 'author in parentheses'.The examples given use the Keeley citation given above from Twentieth Century Literary Criticism.

The name of the reference’s author is used in your sentence, so the in text reference is only to the page number in parentheses.

The second style is if you do not use the reference’s name in the sentence, so need to include in your parenthetical phrase.

Example: A comparision of Eliot and Seferis leads the reader to understand ... (Keeley 224). 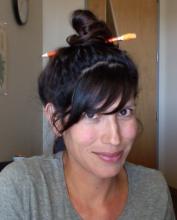